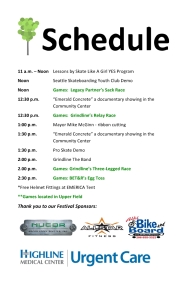 The festival was delayed until September so it could coincide with the grand opening of the Delridge Skatepark.

“The Delridge community showed strong support for a skatepark during our citywide skatepark planning process in 2006. Their involvement and commitment helped us allocate the resources for this great park,” said Christopher Williams, Acting Seattle Parks Superintendent. “This skatepark is just one of the many Levy funded projects that together we have brought to this West Seattle neighborhood, and just the newest in skate facilities with others currently in design or construction.” – See more at: http://parkways.seattle.gov/2011/09/08/grand-opening-celebration-september-17-for-delridge-skatepark/#sthash.VjtG6lHE.dpuf

Check out this YouTube video from one of our neighbors:

During the opening event, Skate Like A Girl Youth Employment Skateboarding Program offered free skateboard lessons, followed by the official ribbon cutting. “Emerald Concrete,” a 30-minute documentary created this summer by the RecTech Youth Media Corps, was shown inside the Delridge Community Center. The documentary tells the story surrounding the building of a world-class skatepark on site at Delridge Community Center.

The Day also featured a full schedule of entertainment and picnic style games such as relay races and an egg toss. Check out GRINDLINE (the band) performing at the skatepark:

With over 40 vendors and more than 2,000 attendees a small group of neighbors truly turned the festival into a grassroots success, with a community-focused day celebrating the neighborhood in collaboration with the City of Seattle Department of Parks and Recreation.