The event kicked off with a welcome from this year’s Planning Committee followed by a few words from David Bestock, Director, Youngstown Cultural Arts Center, who introduced the Opening Program led by Delridge Neighborhoods Development Association Staff and Volunteers. It was a chance for everyone to get acquainted, engage in small group discussions about neighborhood strengths and struggles, and begin working towards creative solutions. Graphic facilitator Maketa Wilborn captured many of the ideas and conversation topics in a mural which was later hung in the entranceway of the building.

The second part of the event allowed attendees to choose one of four 60-minute Breakout Sessions on topics including Land Use, Staying Informed & Getting Connected, Transportation, and Public Safety.

The Land Use Committee’s Cindi Barker talks about Urban Villages. 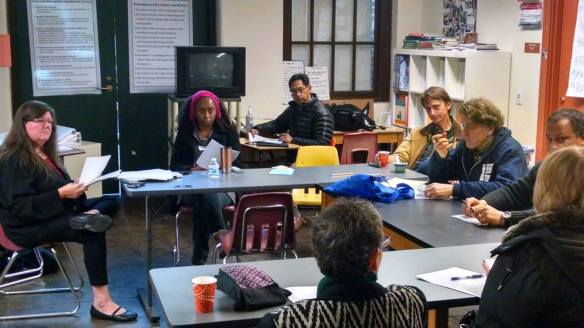 West Seattle Blog’s Tracy Record (left) leads her session on how to keep up-to-date on what’s happening in our neighborhood and city and where to turn to for more information. 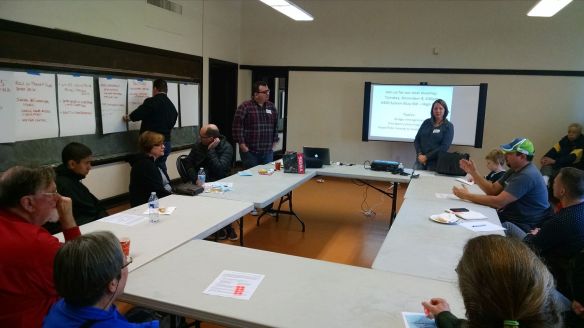 West Seattle Transportation Coalition Boardmembers gather input from participants on what the group’s legislative priorities should be and potential solutions for solving the traffic and safety issues facing our peninsula.

After participating in one of the breakout sessions to learn more about how to stay informed and get involved, the final part of the day asked attendees to join in one of two discussions about major projects underway in West Seattle and help direct their development by sharing personal knowledge and perspective. Seattle City Councilmember Tom Rasmussen with support from City staff in the Department of Transportation reviewed design plans being proposed for the Fauntleroy Way SW Boulevard Project in one classroom, while neighborhood volunteers from the ACT Committee, with support from City staff in the Departments of Planning & Development and Neighborhoods worked on the North Delridge Action Plan Update in the Theater.

2 thoughts on “Gathering of Neighbors”